I was struck by this interesting post about wall paintings in Poland.

Part of our training at Longthorpe as volunteers includes telling visitors about the significance of numbers to the Medieval mind.

The Wheel of the Five Senses: 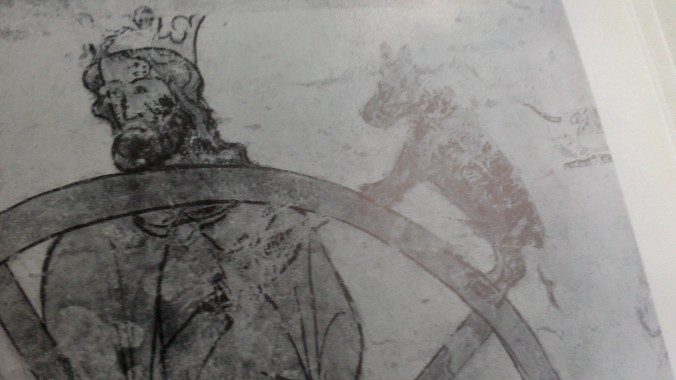 and the Seven Ages of Man.  We also have the Twelve Apostles, and the Twelve Labours of the Month.  What we don’t have is the Nine Worthies.

The blog from Freelance History Writer explains that the Nine Worthies were a group of nine powerful rulers and the greatest conquerors who ever lived. They included three classical pagan heroes (Alexander the Great, Hector, and Julius Caesar), three Jews (David, Joshua and Judas Maccabeus), and three Christians (Charlemagne, Arthur and Godfrey de Bouillon). In medieval art, architecture and illuminations the Nine Worthies motif became enormously popular. Some of the finest examples have survived until today, most notably in Italy, but also in Central Europe.

The blog explores some sites in Poland. One is a Medieval Tower, dating, we are told, from 1313 – 1316.  This is almost contemporary with Longthorpe Tower.  It’s grander, though, since it was “probably built by Duke Henry I of Jawor.  In the 1320’s/1330’s, the said duke commissioned what is considered its greatest treasure. According to recent research it was then that the southern wall of the Great Hall was adorned with paintings depicting the marvelous exploits of Sir Lancelot of the Lake.”

Our timeline explains that Longthorpe Tower was built by Robert Thorpe, Steward to the Abbey of Peterborough in about 1309/10, and the paintings were added somewhere between 1320-1340.  Extremely close in dates!  Could it be that this was an international fashion trend?

Even more exciting – the ducal tower has a window seat inside which reminded me of the window seats on our upper floor.  I wonder, could the enlarged Jacobean window behind our till on the first floor have once looked like this? 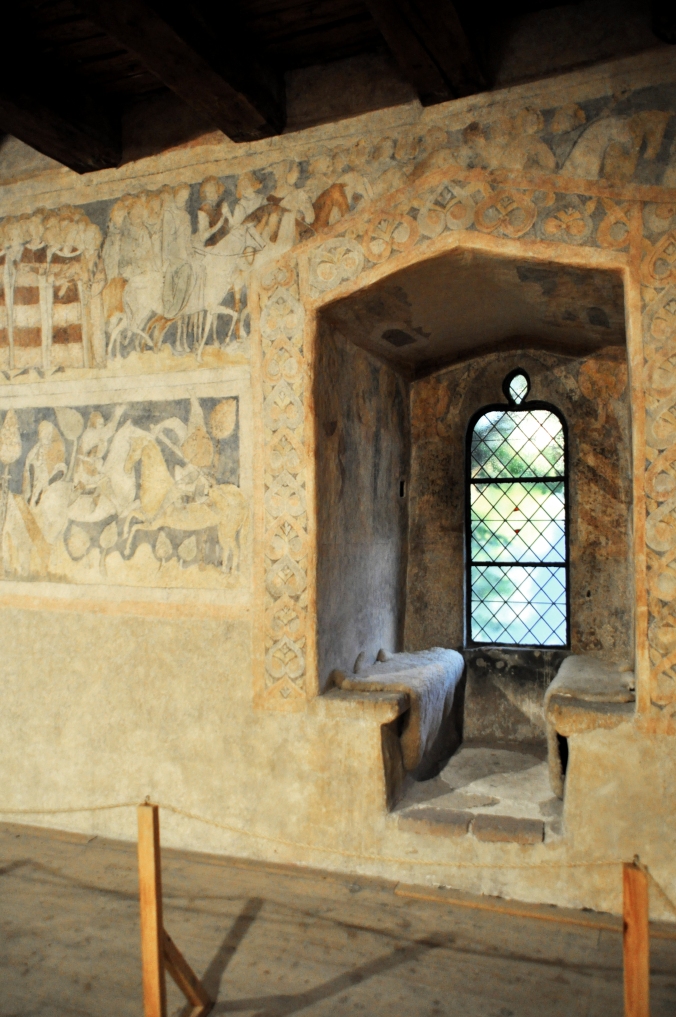 The Great Hall of the ducal tower of Siedlęcin with the unique set of the wall paintings depicting the marvelous exploits of Sir Lancelot of the Lake.   Photo courtesy of Artur Wosz

A similar window on the upper floor of Longthorpe Tower.  Photo author’s own.

I was very excited to see how similar these windows are in construction and outline.  It appears that there was an international fashion for this type of construction.

Paintings, too, seemed to be the height of fashion and a mark of status.

Were these decorative features following a trend set at a Royal level?

The Painted Chamber, Westminster was commissioned by Henry III (reigned 1216 to 1272) and the paintings took place over a lengthy period.

More information can be found here,

22 thoughts on “Another Tower, Another Number”