On the subject of the twelve labours of the month, we are used to telling our visitors that the final picture of the series, only just visible, shows December, killing the pig. For Christmas, of course.

December is confirmed as the month of killing the pig on this wonderful site, provided by the library of Trinity College Cambridge.  We can read detailed information about each of the Labours of the Months, and see pictures of what some of the wall paintings would have shown.  December shows the raised arm we can faintly see in the Tower painting, and the fat pig, about to expire.

One day, a visitor arrived who was more than usually attentive and interested in the Labours.  She informed me that she was a lecturer in Medieval Studies and that the pig would have been killed in November.  There would have been no food for it in December, and it would need to be cured and prepared.

I was intrigued, but pointed out that there was no room on the arch for a further month to be inserted below the one we call December.

The idea stuck in my mind, however.

On a trip to Norfolk earlier this year, I visited St Mary’s Church, Burnham Deepdale.

The church has a Norman font, depicting in stone the Twelve Labours of the Months.

Below, from left, December, November, October.

The first picture reading from the left shows four figures feasting at a table.  This is explained as being the month of December.  The middle picture is killing the pig (November) and the right-hand one shows October, themes connected with the harvest. It is thought to be either grinding the corn, or pouring the fruits of the grape harvest. 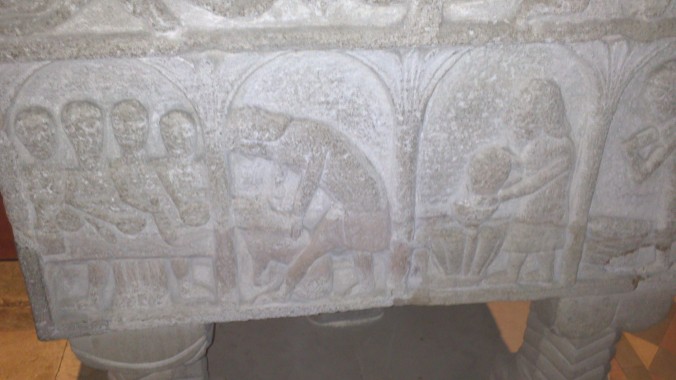 The picture below shows the pig more clearly, and also September, threshing with a flail.

Below is the information provided in the church itself.

In St Mary’s font, November, the eleventh month, shows the pig indeed being killed.  There is also a different January from the one at Longthorpe Tower, showing a man drinking from a horn.  Not until February is he warming his feet at the fire.  There are thus two additional pictures,

The font certainly casts an interesting new light on the Twelve Labours.