The Pastons were a Norfolk family, who thrived in the medieval period.  They are best known for their surviving letters, which are a unique and fascinating record of the time as expressed in family communications. 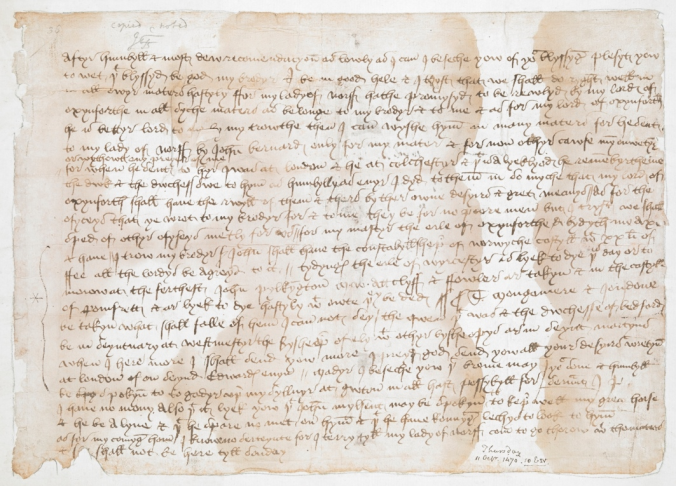 Many histories of the Wars of the Roses include references to the Paston Letters in their bibliographies.  A King was at Walsingham, a Duke was at Caistor.  A draft was requested for the Battle of Bosworth.

It’s often said that history is written by the winners, but there is no bias in a family letter never intended for wider circulation.

The earliest letter dates to 1418,  so it is the 600th anniversary is next year.  The British Library is celebrating with a digital release of many of the letters which can thus be read in full online. 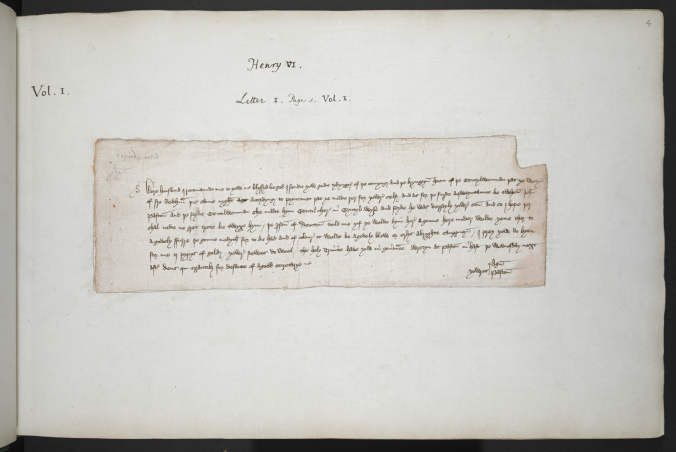 Other celebrations will take place tracking Paston sites in Norfolk.

What relevance does the Paston archive have for Longthorpe Tower volunteers, other than the medieval timeframe?

The answer is found on the BBC History website.  Here’s a quote:    “The Paston family rose from the peasantry to the aristocracy within just two generations. This is the story of how they did it.”   The full page can be found here.

Just like the Thorpe family, although a bit later in the period, the Pastons rose from the peasantry, largely via education, to senior positions in the legal field, and aquired land and titles as they advanced.

Visitors to the Tower sometimes ask how the Thorpe family rose from its humble background to the gentry in a period when social mobility was virtually non-existent. Indeed, it was actually illegal to pass yourself off as gentry if you were from a humble background.

Clearly education was key.  The themes of education in our Tower wall-paintings are usually cited.

Less well-known is the significance of having a private chapel.  We know that what is now Longthorpe Parish Church was moved, in its entirety, from a location about a mile away, in approximately 1263.

The Paston family had to defend themselves against the charge of being”base villeins” passing themselves off as gentry.

Here’s part of the court record of how they defended themselves:

…….. Also they shewed divers deeds and grants before time of mind, how that their ancetors had licence to have a chaplen and have divine service within them. And that divers of their ancetors had given lyvelyhood to houses of religion to be prayed for, and confirmacions under the Great Seale of our noble ancestor Kinge Henry the Third, son of Kinge John, confirming the same grants.

The key link is “licence to have a chaplen”  – a private means of worship.

It would appear that the moving of the chapel to a location next door to the Thorpe family residence may have had more significance than mere convenience.

Our timeline tells us that Longthorpe Tower was built in 1309/10.  This was during the reign of Edward II.  It was a time of national unrest and upheaval,  largely caused by the total unsuitability of his personality and the divisiveness of his actions as King.  He was followed by his son, Edward III, who reigned from 1327 to 1377.  During this reign the paintings were added by Robert Thorpe, steward to Peterborough Abbey.

In Canterbury Cathedral the tomb of Edward III’s son may be found.  He was known at the time of his life and death as Edward of Woodstock, Prince of Wales.  The awe-inspiring title “The Black Prince” came much later.

The Prince died just one year before his father, of a lingering infection picked up on campaign in Spain, thought to be dysentery.  His will requested that the epitaph inscribed on his tomb should be these words:

Such as thou art, sometime was I.
Such as I am, such shalt thou be.
I thought little on th’our of Death
So long as I enjoyed breath.
On earth I had great riches
Land, houses, great treasure, horses, money and gold.
But now a wretched captive am I,
Deep in the ground, lo here I lie.
My beauty great, is all quite gone,
My flesh is wasted to the bone

As Tower volunteers we are very familiar with the first two lines – the words of a French poem which explain the motif of The Three Living and the Three Dead.

The wall painting at St Mary’s Church, Lutterworth is huge.  The church guide tells us that Victorian church restorers removed a gallery and found the top part of the painting preserved behind it.  The Victorians then repainted the three kings.  Later, in the 1980’s parts of the painting of the three skeletons were found to the right. These have not been retouched so are barely visible.  Impressive jawbones and grinning rows of teeth can just be seen.

Two of the kings are holding falcons.  The falcon was one of the favourite symbols of Edward III, (reigned 1327 to 1377).  It was during his reign that, (our timeline tells us), Robert Thorpe added the paintings to the tower.

Queen Philippa gave Edward a depiction of himself holding a falcon as a wedding present.  The symbol became a traditional badge of the Plantaganet family. 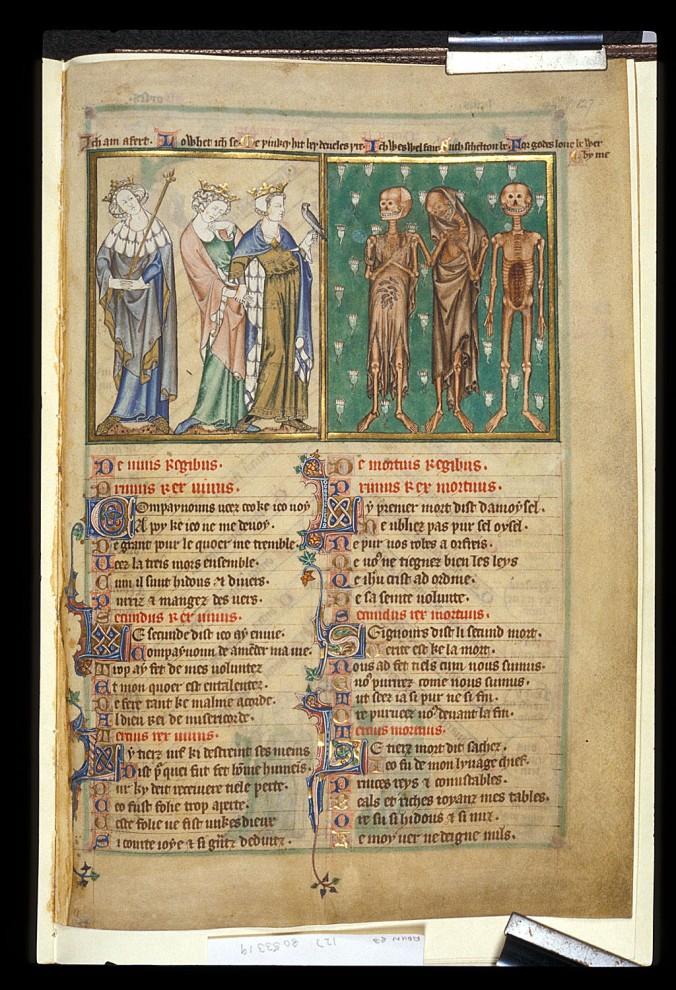 The British Library holds a manuscript copy of a version of the Three Living and the Three Dead (see above).  BL Arundel 83 f 127

It’s of interest to see what the colours would have looked like originally, and to see the similarities in the conditions of the three dead.

“Our” right hand King is holding up his hand in a very similar pose, and one wonders whether originally it was holding a hawk as in the BL version.

This site shows another version, in a church.  Seemingly the hawking party was the usual treatment.

The moral of the story is that the three kings, “flaunting their vitality” are reminded of their mortality.

Peakirk Village Hall recently hosted an evening talk, given by Dr Stephen Upex of Cambridge University.  Having learned at a recent meeting of Tower Volunteers that there is a wall painting of The Three Living and the Three Dead in Peakirk Church, I went along with another Tower volunteer in the hope of finding out more.

Dr Upex did not mention the church or the wall paintings, but he gave a fascinating overview of the history of our area over the last 5-6,000 years.

If you come from out of the area, your friends and relatives might say, “Oh, Peterborough, the train goes through it,” when you mention your town.  That is as much as they know.  However, in past millennia, the area was “densely populated” (Tacitus, Roman author, 1st century AD) and a wealthy, sought-after place to live.

Dr Upex began by telling us that the land has been walked over for the last 60-70,000 years, and layers of history lie just under the surface.  The most obvious evidence of this is from crop-marks, visible from the air.

The crops grow differently according to the soil they are growing over, where the subsoil has been disturbed.  Most frequently the crops are darker because underneath there is a ditch, often with rubbish in it, which will leave the soil less compact and moister so that the crops will be richer.

By contrast, where the crops are growing over a stony Roman Road, the soil beneath is hard and dry, so the crops grow less strongly and appear lighter.

Darker marks over trenches and ditches show the outlines of buildings

The earliest archeological evidence is from the Stone Age, 5-6,000 years ago.  At Etton, there is evidence of a causewayed enclosure in an old meander of the River Welland.  It is thought to have been a Stone Age ceremonial site.  In autumn, the people would gather, throw offerings of nuts and seasonal fruits, and make sacrifices of pottery and axes, which they would smash to put them beyond use.

There are also wooden henges (like Stonehenge, but made of wood).  There is one at Maxey, and a Bronze Age burial mound south of Lolham Hall which has been flattened by ploughing and only visible from crop marks.

The Iron Age saw the development of protective enclosures, presumably because, after the Bronze Age, wealth and status (signified by bronze and copper beakers and weapons), showed that there was property to be defended.

Overtaking the Iron Age settlements, the Romans invaded in the 1st century AD.  They built a fortress at Longthorpe, underneath what is now the golf course overlooking the Nene.

A tile from the ninth legion can be seen in Peterborough museum, suggesting that the doomed legion which set out to battle against Queen Boadicaa was based at the site.

Dr Upex noted that in Fenland there are no Roman stone buildings or large villas, suggesting that the area was a peasant farmed estate.  Taxes were collected at Stonea, and then from Castor Palace.

Castor Palace (evidence of which can still be seen, in the Roman tiles built into the external walls of Castor Church) was the second largest Roman building in Britain, second only to the Governor’s Palace in London.  It would have been visible for miles, particularly from the Roman town of Durobrivae in the Nene valley.  This was a large and wealthy town which was built up around another fort defending a river crossing.  Pottery finds, and the famous Waternewton Hoard show the wealth and status of this town, which is now completely invisible lying under fields.

This shows how rich, fertile, and high-status the area was at the time.

After the Romans, the area became a new Anglo-Saxon boom town building up around the original cathedral (circa 600 AD), drawing in monks from around the area. 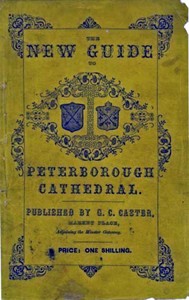 And so it developed throughout the middle ages, surviving the Norman Conquest, until the next major change of land use was enclosures in the eighteenth century, followed by the arrival of the railways in the nineteenth, right up to the New Town in the twentieth century.

How lucky we are to live in such a historic place.